Thank you to Laurel Ann Nattress (of Austenprose) for allowing me to be apart of the blog tour and giving me the opportunity to read this wonderful book and thank you to Syrie James for writing it. 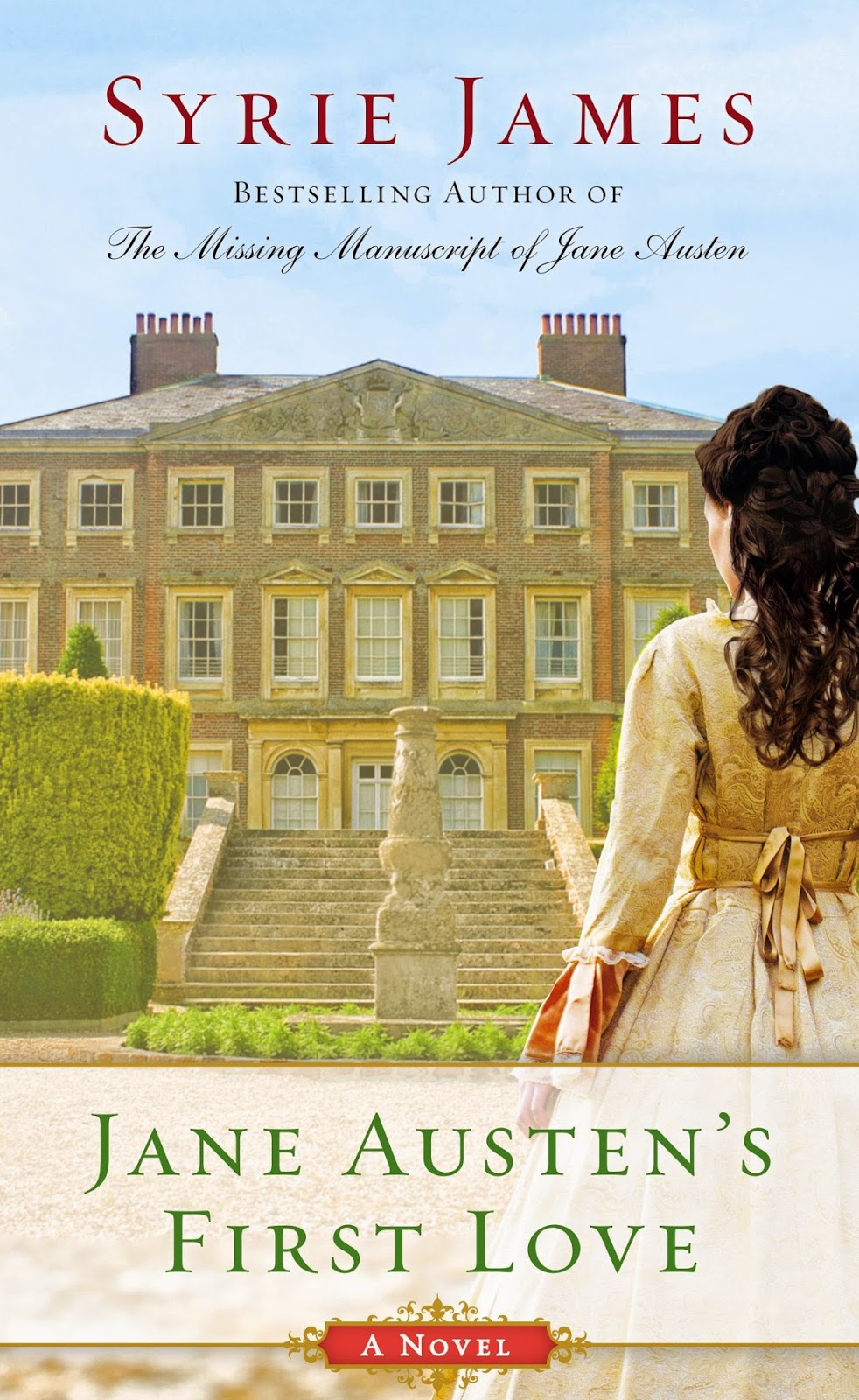 Genre: Austenesque/Historical Fiction/Romance/Young Adult
Publisher: Berkley (Penguin Group USA)
Trade paperback ISBN: 978-0425271353
eBook ISBN: 978-0698139268
I became a fan of Syrie James after reading Nocturne, so when I was asked if I might consider reviewing her latest work, I could not resist the temptation. I find that I was not disappointed in the beautiful tale that James has so masterfully woven.


Jane Austen is a precocious fifteen year old who dreams of doing something useful, writing something of importance and falling in love. When her older brother Edward (who was adopted and raised by wealthier cousins) announces his engagement Jane get’s her chance. Jane, her sister Cassandra, their brother Charles and Mother travel to Kent to celebrate. While there Jane meets the worldly Edward Taylor and she falls in love with him. It makes for a fascinating tale.


What I found exciting as I read was the connection to the novels Austen herself wrote. A play is to be produced at home after poor weather cancels some of their previously planned events which is reminiscent of Mansfield Park. Matchmaking attempts gone awry such as in Emma, Sisterly bonds as in Sense and Sensibility and Pride and Prejudice,  rapier wit as evident in Pride and Prejudice, and an active imagination as in Northanger Abbey.


In the book, Jane herself has the traits of heroines in her own novels. Jane tried to be a matchmaker and just as Emma discovered, it does not always have the results you were hoping for and the human heart is better left to discovering its own wants and desires. Her wit and impertinent remarks reminded me of Elizabeth Bennent in Pride and Prejudice. Jane is a bit like Marianne Dashwood in Sense and Sensibility in that she meets a dashing stranger who she falls madly in love with. We also know that in real life Jane and her sister Cassandra had such a strong bond and it is portrayed beautifully on the pages. There bond reminded me of Jane and Elizabeth in Pride and Prejudice and of Elinor and Marianne in Sense and Sensibility.


We all know Austen’s works and they always say to write about what you know, so I cannot help but think that each of Austen’s heroines had a little bit of herself in them. Or that her novels did not have some of her own experiences in them. I wouldn’t have expected less form James in this regard, for I feel that when she writes something about Austen she makes sure to do her justice.


Jane Austen’s First Love is a captivating read. Any Austen fan would like to think that Jane herself had been in love at least once even though she never married and this book fulfills our greatest wish as fans---to see Austen in love. James has done her research for the novel and really brings the characters to life. Edward Taylor was a real person and just the sort of man Jane would have been drawn to.


James has constructed a beautiful love story. A fitting interlude that while it brings pangs of regret for its ending can only be looked back upon with fond remembrance. As Elizabeth Bennett said in Pride and Prejudice, “Think only of the past as its remembrance gives you pleasure.” This novel has given me pleasure, indeed.
Get this wonderful book in time for Christmas. Order by December 15th.

Syrie James, hailed as “the queen of nineteenth century re-imaginings” by Los Angeles Magazine, is the bestselling author of nine critically acclaimed novels that have been translated into 18 languages. Her books have been awarded the Audio Book Association Audie, designated as Editor’s Picks by Library Journal, named a Discover Great New Writer’s Selection by Barnes and Noble, a Great Group Read by the Women’s National Book Association, and Best Book of the Year by The Romance Reviews and Suspense Magazine. Syrie is a member of the WGA and lives in Los Angeles. Please visit her at syriejames.com, Facebook or say hello on Twitter @SyrieJames. 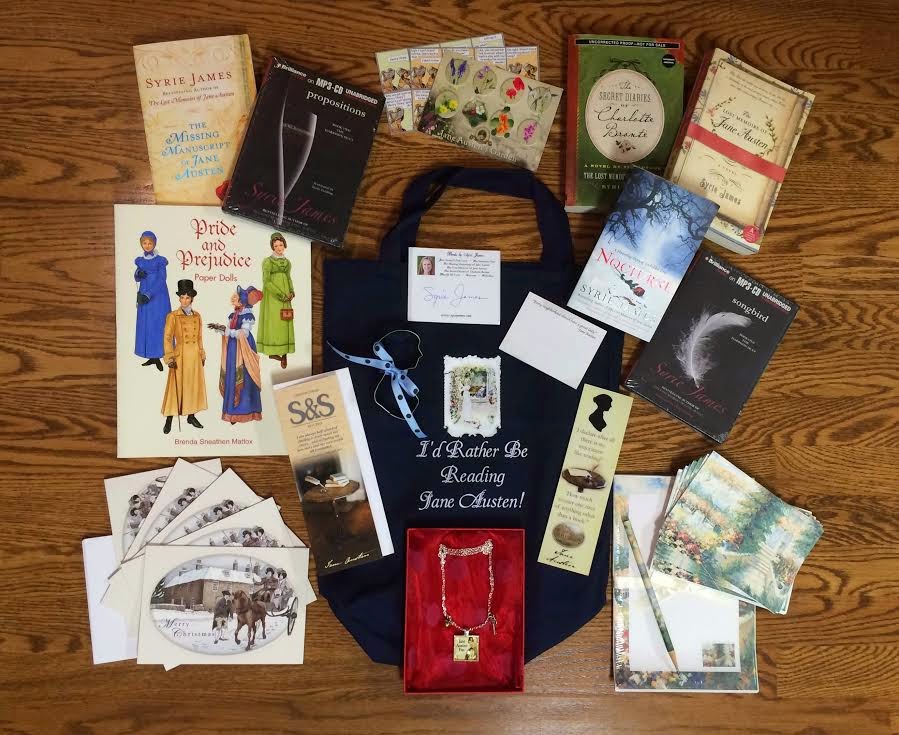 To celebrate the holidays and the release of Jane Austen's First Love, Syrie is giving away five prize packages filled with an amazing selection of Jane Austen-inspired gifts and books!

To enter the giveaway contest, simply leave a comment on any of the blog stops on the Jane Austen's First Love Holiday Blog Tour.

Increase your chances of winning by visiting multiple stops along the tour! Syrie's unique guest posts will be featured on a variety of subjects, along with fun interviews, spotlights, excerpts, and reviews of the novel. Contest closes at 11:59pm PT, December 21, 2014. Five lucky winners will be drawn at random from all of the comments on the tour, and announced on Syrie’s website on December 22, 2014. The giveaway contest is open to everyone, including international residents. Good luck to all!

The book sounds wonderful! I can't wait to read it! Thanks for the great giveaway, Syrie!

I love how Syrie James's book brings in various parts of Jane Austen's novels. This sounds like a fun read!

I am looking forward to seeing how Syrie incorporates the aspects of the heroines in the story to make it appear that Jane's experiences helped her create the characters in her novels. I am finding she has done a very credible job of this in The Missing Manuscript of Jane Austen. skamper25 (at) gmail (dot) com

I enjoy reading about how this book came about and what it entailed to bring this story to the readers.

So wanna read this novel! :D

I am looking forward to reading more about Jane's First Love....:)

I think connecting Jane's novels into this novel is a great idea.

Thank you for doing the interview and thank you so much for the wonderful giveaway. nrslalee00@yahoo.com

Another great stop on the blog tour. Really enjoying it.

This sounds like a wonderful novel. I can't wait to read it!

Amazing all the research, that the author has done. This book is on my Christmas list. Thank you for the giveaway.

This novel sounds delightful!!! Would love to read it :)

I too really enjoyed being part of this tour, I think we should ring in the holidays this way every year. Really fun to read everyone's thoughts on the book and their Jane musings.

Of course the lucky winners of that beautiful items assembled certainly will have an extra gift this season. Thanks for some news reads that I discovered on your blog as well.

Yay, another view of Jane, can't wait to read it.

The more I read on this blog tour the more anticipation I feel about reading this book over the holidays! Thanks for the opportunity to win such a fabulous giveaway!

I really want to read this book and I would love to win.
dez3b at yahoo dot com

Thank you so much, Kate, for your wonderful review. I am truly honored by what you wrote and happy that "this novel has given [you] pleasure, indeed."

It has give me great pleasure that you participated in the Jane Austen's First Love Holiday Blog Tour. :) Happy holidays to you, and to everyone!

Please do visit me at www.syriejames.com, and stop by my facebook pages. I look forward to continuing our association, and our love of Austen!

Your book sounds wonderful Syrie! Would love to read it :)