The Tale of a Novel and Other Tidbits

As the end of 2011 approaches, I want to give a year end wrap up and provide a look into the future. What have I been up to in 2011? Read on.
The tale of Colonel Fitzwilliam
Colonel Fitzwilliam’s story is developing nicely. Rewrites are going full steam ahead and are a constant companion in my life. There are some big changes going on in the manuscript and there were some technical difficulties which have made it necessary to push back my release date to June 2012.
I realize many of you will be disappointed by a later publishing date, but know that it so Colonel Fitzwilliam will be worth spending your hard earned money on. I want you to be excited to have his story in your library. I hope you will all be just as eager to get your hands on Colonel Fitzwilliam in June as you are now.
Cover Art
In conjunction to writing Colonel Fitzwilliam’s story, it is necessary to select cover art. I am pleased to say on that front I have been successful. I have settled on some great portraits which I hope will result in a stunning cover which will make you even more excited to get Colonel Fitzwilliam in your hands.
Feline Envy
If you don’t already know, I have two cats named Sonya and Sophia. Sonya and Sophia are both rescue animals that like to think they’re people. I have not yet determined which cat it is, but they like to knock over the water dish. I spend a lot of time mopping the floor.
Sophia likes burrow under the bed covers in the winter and sleep all day in their warmth. She also likes to chew on the plastic shower curtain liner.
Sonya likes to look out the window and at five in the morning will paw at the shades to ensure I will wake up and open them for her. She also likes to nip at my nose when she is in a particularly loving mood.
These cats have personalities all their own. It’s like having kids, but at the end of the day they want love just like the rest of us.
New Destinations
I want to move to Denver, Colorado. It is a waiting game, while I patiently await an opening in one of our field offices. Maybe in 2012 I will be writing you form there and posting some fabulous pictures.  I’ll keep you updated on that front.
Finally, I want to thank you all for a fabulous year. I look forward to another great year and to giving you a new novel to explore.
What do you look forward to most in the New Year?
Posted by Kate Dana at 10:10 PM 2 comments:

FARIDA MESTEK
You won a copy of Mr. Dracy Takes A Wife by Linda Berdoll
Winner was chosen by Random.org.
Posted by Kate Dana at 7:58 PM No comments:

Pride and Prejudice: The Jewess and the Gentile by Lev Raphael: A Review 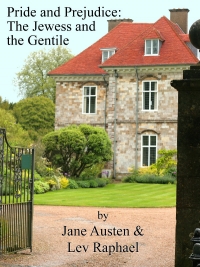 Pride and Prejudice: The Jewess and the Gentile

By: Jane Austen and Lev Raphael

Source: Supplied by the Author


Pride and Prejudice with a spice of Jewish flare. We know the story so famously written by Jane Austen that I won’t go into the particulars again. Lev Raphael offers us a nice dose of Austen, which remains virtually unchanged. Purists will delight in this offering, but those looking for something more may be disappointed.


I enjoyed this novel. What I did know to be Mr. Raphael’s contributions where witty, funny and well composed. Mrs. Bennet as a yenta was actually quite appropriate and I laughed quite a few times at her carefully placed Yiddish sayings. The conflict of Elizabeth being a Jewess and Darcy being a gentile was staged delicately, providing just enough tension to make their romance rocky.
I was disappointed in this Jane Austen retelling. I had high expectations for what I presumed to be a fresh take on the Austenesque novel. I was disappointed because I saw so much potential. For anyone familiar with Jewish history there is the basic knowledge that they have not had it easy. While I would not look for Mr. Raphael to make any political statements, my point is there is so much more Mr. Raphael could have done with the Jewess and Gentile aspect of the novel.
Mr. Raphael could have really placed his mark, but he fell short by playing it safe. When I read an Austenesque novel I want to know the author has placed their mark on it. I know who Jane Austen is, but who are you and what makes your Austen novel so different? There was too much Austen and not enough Lev Raphael. As I mentioned earlier Raphael could have really played with the Jewess and Gentile aspect, but didn’t.
Despite my gripes, I would recommend this novel if you are looking for a light Austen diversion.