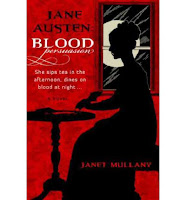 
It is 1810, and the Damned are out of favor—banished from polite society. Jane Austen’s old undead friends have become new neighbors, raising hell in her tranquil village just in time to interrupt Jane’s work on what will be her masterpiece. Suddenly Jane’s niece is flirting dangerously with vampires, and a formerly respectable spinster friend has discovered the forbidden joys of intimate congress with the Damned (and is borrowing Jane’s precious silk stockings for her assignations). Writing is simply impossible now, with murderous creatures prowling the village’s once-peaceful lanes. And with the return of her vampire characteristics, a civil war looming between factions of the Damned, and a former lover who intends to spend eternity blaming her for his broken heart, Jane is facing a very busy year indeed.


Darcy is acting rather oddly. After months of courting Elizabeth Bennet, no offer of marriage is forthcoming and Elizabeth is first impatient, then increasingly frightened. For there is no denying that the full moon seems to be affecting his behavior, and Elizabeth's love is going to be tested in ways she never dreamed...


Darcy has more than family pride to protect: others of his kind are being hunted all over England and a member of Darcy's pack is facing a crisis in Scotland. It will take all of Elizabeth's faith, courage, and ingenuity to overcome her prejudice and join Darcy in a Regency world she never knew existed.

When Charles Bingley and Mr. Darcy made proposals of marriage to the Bennet sisters at the end of Jane Austen's Pride and Prejudice, Caroline Bingley was both distressed by her brother's choice of bride and humiliated by Mr. Darcy's rejection of her. And she made her objections known.

Now banished from her brother's household, Caroline must return to her mother's home in the north of England until she can make amends with both Bennet sisters. Desperate though Caroline may be to return to polite company, she absolutely refuses to apologize to Miss Elizabeth Bennet, and instead, she seeks an alternative route back into society in the form of Mr. William Charlton, heir to a barony.


Through her connections with Mr. Charlton's sister Lavinia, Caroline begins to infiltrate the household in the hopes of securing the gentleman and his title for herself. However, she must also contend with her vexing emotions regarding Mr. Patrick Rushton, a once-wealthy landowner, and the meddlesome opinions of Mrs. Rosemary Pickersgill, the companion sent by her brother.


When all that Caroline has ever dreamed of attaining--an ancient family name, a title, and a home of her own--is finally within her reach, will she grasp for it even if it means disregarding the workings of her own heart? Or will she cast off the trappings of society and give herself to true love?

“My feelings will not be repressed. You must allow me to tell you how ardently I admire and love you.” If you just heaved a contented sigh at Mr. Darcy’s heartfelt words, then you, dear reader, are in good company. Here is a delightful collection of never-before-published stories inspired by Jane Austen—her novels, her life, her wit, her world.

Pride and Prejudice: The Jewess and the Gentile
By Jane Austen and Lev Raphael
Get ready for Pride and Prejudice with brisket. Lizzy Bennet's an Anglo-Jew with a Jewish mother, some Jewish attitude, and lots to say about Mr. Darcy, who has some serious attitude problems of his own when it comes to “Hebrews.” When these two proud people meet, is it still love at first...slight? Will prejudice keep them from bridging the gap between Jew and Gentile? Austen's classic novel gains new layers of comedy and drama in this subtle, ingenious mash-up. There are no monsters here. Raphael doesn't do violence do Austen's text, but lovingly and meticulously reinvents the book and helps readers see it and Regency England through a brand new prism.

Mr. Darcy's Undoing
By Abigail Reynolds
A passionate new Pride and Prejudice variation explores the unthinkable-Elizabeth accepts the proposal of a childhood friend before she meets Darcy again. When their paths cross, the devastated Mr. Darcy must decide how far he'll go to win the woman he loves. How can a man who prides himself on his honor ask the woman he loves to do something scandalous? And how can Elizabeth accept a loveless marriage when Mr. Darcy holds the key to her heart? As they confront family opposition and the ill-will of scandal-mongers, will Elizabeth prove to be Mr. Darcy's undoing?

Thank you for the mention. It's much appreciated.