Last evening I watched the 2007 version of Persuasion, staring Sally Hawkins (Anne Elliot) and Rupert Pery-Jones (Cpt Frederick Wentworth). I tweeted throughout the movie and have printed the tweets below. Enjoy!

About to start the viewing of Persuasion (2007). 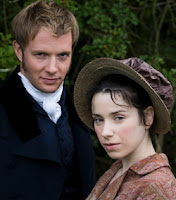 The Musgrove's have arrived.

Oh, lawd it's Mary.....the faux invalid.
A picture of her mother and letters (love letters from Cpt Wentworth perhaps?) and then leaving behind her home. Such a gripping scene.


"I think very differently now that I was persuaded to do eight years ago."

Lady Russell tries too hard to look out for Anne.


Then her nephew falls from a tree and ever steady Anne is there to care. She has a big heart.


Standing in front of the mirror trying on a dress for Cpt Wentworth's arrival...heartbreaking


Anne is always passed over and yet volunteered for everything. How unfeeling these people are.


He sees her....she tries to hide. Oh, the LOOK! The passion


"Once there were no two hearts so open.....now we are strangers." Ouch


Awkward. Neither knows what to do at dinner with the Croft's.


Cpt. Wentworth doesn't know what to do with Anne. Trying to pretend he does not love her. Fool!


Frederick Wentworth you unfeeling jerk. Trying to cut Anne like she has no feelings.


Geez Mary shut your mouth. She is so immature.


Anne is about to fall. A reflection of her she is teetering on edge. Damn you Wentworth


Of course, he goes to make sure she is alright so Wentworth you sort of redeem yourself.


That's right Wentworth, Anne has had other suitors. Charles Musgrove could have been her husband.


She's walking like a wounded animal. Of course, she just overheard Louisa and Wentworth


Wentworth you know you enjoyed lifting Anne into the Croft's carriage. You do still care. Sly devil.


Here come the visit to Lyme. The catalyst is approaching like a storm.


Cpt Wentworth on a horse riding behind the carriage. Such a sexy scene.


Discussion between Anne and Cpt Benwick about his lost love....very poignant


We love longest when our love is gone, that is what Anne believes


"He is young and time is a great healer."


Mr. Elliot you are a bad man.


Wentworth is staring down Mr. Elliot and he doesn't even know it. If Wentworth had a sword he's run you through Elliot. HA!


That is not Wentworth's happy look. Mr. Elliot better watch out.


Anne displays her calm under pressure yet again.


Yes, Wentworth you still love her. Don't deny it!


Wentworth deserves a little torture for trying to stick it to Anne by flirting with Louisa.


"Do you think this is a good plan?" Proof that Wentworth still cares for her opinion.


Lady Russell the worst word to mention Anne. Wentworth turns cold again and rides on his horse back to Lyme.


Sigh, Anne left again. On to Bath she goes.


Sir Walter and Elizabeth living in luxury still. You fools will never get out of debt. Geez, money grubbing brats.


Elizabeth Elliot is about to wet herself talking about Mr. Elliot. Is she a tramp?


Yes, Elizabeth is drooling at the mouth over their cousin Mr. Elliot. If she could rip her bodice I think she would. Tramp in training?


Cpt Harville just dropped the bomb. Paying all that attention to Louisa has got people thinking you will marry her Wentworth. You FOOL!!!!!!


Listen to Harville, Wentworth. Get your butt out of Lyme under false pretenses or you will be saddled with Louisa. YOU WANT ANNE!


Lady Russell stop trying to persuade Anne. I know you are just trying to guide her like a mother, but really stop it.


Mr. Elliot you are worse than the slime on a snake. Stop trying to cozy up to Anne.


Louisa improves. She is engaged, but to whom? Anne thinks Wentworth.


Anne cries in pain and heartbreak. Wentworth if you hadn't flirted with Louisa just to stick it to Anne.


Anne has a backbone. Money is not everything to her. That's right Sir Walter she is going to meet Mrs. Smith. Anne has a HEART.


Nurse Roge has all the gossip for Mrs. Smith. Hehe. You want the juice go to the servants.


Wentworth wet along the sea wall. He realizes he still loves Anne. "She is perfection itself. I will never love any but her."


Cpt. Harville tell Wentworth the Cpt Benwick has proposed and was accepted by Louisa Musgrove.


"Then I am free," Wentworth cries in jubilation. Manly hug with Cpt Harville.


Anne considers Mr. Elliot briefly since it would give her her home.


Anne learns from the Croft's that Cpt. Benwick is to marry Louisa, not Wentworth. She is all astonishment and yet relieved I believe


Wentworth is in Bath. Oh my.


Wentworth comes in out of the rain to see Anne. Sigh, those looks. The closing of distance.


Wentworth has to point out that Louisa is to marry Cpt. Benwick. Haha. Had to work it in didn't you Wentworth.


Damn, Mr. Elliot you had to ruin their passionate look moment. DRAT!


Awkward. Mr. Elliot think' he won and Wentworth would punch him if he could.


Wentworth came for you Anne. She can barely contain her joy.


Yes, Wentworth is acting cold cuz he thinks’ Anne is attached to Mr. Elliot. "Are you staying in Bath long?" "That depends." tense moment


Rumors of Anne and Mr. Elliot....don't fall for gossip Wentworth. You idiot. That's right Anne run after him. STOP him!


"There is nothing here worth me staying for." Ouch damn it Wentworth!


Oh, Mr. Elliot you slimy fool. Oh, well make a fool of yourself. She's going to just say no.


Anne would like you to go away now Mr. Elliot. She don't want you!


Wentworth comes to speak to Anne on behalf of the Croft's in regards to the house they rent. Trying to act cold and unfeeling. Sigh.


LOL...it is all Wentworth can do to get out what the Croft's asked him to say. All he wants’ to do is kiss Anne or run like heck.


"He is utterly misinformed!" The shock on Wentworth's face at finding out Anne is not engaged to Mr. Elliot is priceless


Mrs. Smith tells the truth of Mr. Elliot. Anne goes off after Wentworth. That's it girl. Land your man!


The famous letter penned by Wentworth is approaching. I melt every time at its contents.


"Miss Elliot, I can no bear this no longer."


"I have loved none but you. For you alone brought me to Bath. For you I think and plan."


Anne is on the run through Bath.


She is out of breath. Wentworth and Anne staring at each other. Charles they don't even know you are there anymore. Go away.


"Cpt I am in receipt of your proposal and I am of mind to accept it."


"Are you quite certain?"


"I am determined. I will. And nothing will persuade me otherwise."


The slow lean in to the long awaited kiss. Perfection!


They are finally happy. Wentworth also gives her her home back. That is love.


Wentworth you sly dog you. Passionate love at its best. Wentworth and Anne at long last.
Posted by Kate Dana at 8:42 PM