REVIEW: A MODERN DAY SENSE AND SENSIBILITY BY KAITLIN SAUNDERS 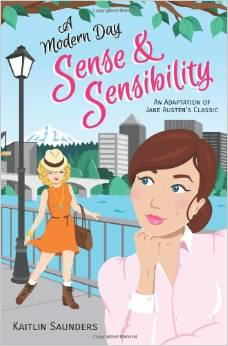 It’s sometimes hard to imagine a Jane Austen story today given the change in social dynamics. Sense and Sensibility could perhaps be on the harder Austen books to modernize, next to Mansfield Park and Northanger Abby perhaps.  Older men who marry significantly younger women may have been necessity in Austen’s time, but it is not such a socially accepted norm today. Marrying a person you don’t love is kind of an archaic thought now, but I guess if you had Donald Trump assets and wanted your child to marry into even more money that it could happen this day in age. While we can all relate to the theme of money and the reality of having to downsize to a lifestyle that is within our means, it is harder to imagine that one’s own family could be cruel enough to deprive them based on a mere technicality of not having drafted an updated will. But then is it really so hard to imagine? People are just as unwilling to confront the possibility of their own death now as they were back then.


In Kaitlin Saunders modern adaption of Sense and Sensibility, Mr. Dashwood did not leave a will which would have provided for his second wife Diane and their children, Elinor (Ellie for short), Marianne or Margaret.  That lack of foresight to provide for his family will cost them dearly. While he may have been the CEO of a successful company and able to provide for his second family and his son, John Dashwood, from his previous marriage, his lack of planning meant only John would inherit. While John was willing to provide for his step-mother and half-sisters, his money hungry wife Francil is not so desirous in sharing their newfound wealth. Using her female attributes she persuades John that his father’s dying words on his death bed only implied that he should give his step-mother and half-sisters a small lump sum payment of money and the rest was to be for them and their son Harry. I never much cared for John’s wife in Austen’s original novel, but Miss Saunders has really made me detest her.


Diane Dashwood’s pain at the unexpected death of Mr. Dashwood leapt of the pages. I found my heart strings pulled and my emotions well up at what can only be unimaginable pain and then to find out that your husband had never revised his will has to be truly devastating. The unfeeling nature of Francil increases the emotional turmoil of a reader. Diane and her daughters not only have to deal with the stages of grief at the unexpected death of Mr. Dashwood, but they have to contend with being forced out of the only home they have ever known. In all of Francil’s greediness and making them feel like guests in their own home, I almost expected Francil to demand to look through the boxes they had packed so she could  make sure that they were not taking anything that she deemed hers. She didn’t go that far, but she was navigating that way.


When Diane, Ellie, Marianne and Margaret are finally able to leave it almost comes as a relief to the reader. The relief is overshadowed by how much their life has changed. Arriving at their new home in Oregon is perhaps the most depressing realization that they are not in Kansas anymore. They have gone from a beautiful arced estate to a tiny apartment. Yet with surprising resilience they come to accept and love their new home.


One of the many challenges of this adaption would be the romance of Marianne and Brandon. These days it’s a lot harder to justify an older man marrying a significantly younger woman.  Miss Saunders handles this situation perfectly by not really focusing on the age difference.  It is almost as if by not acknowledging it that it develops into something unimportant when the age difference is brought up. This is no easy feat as today’s readers have an entirely different idea of social acceptability than what was acceptable back in Austen’s time.


The dislike Brandon has of Willoughby remains in a slightly updated version of the story. Yet, with Willoughby we retain a certain sympathy for his plight when he gets the chance to explain himself to Ellie when Marianne is ill. In Austen’s original I cannot say one ever feels remotely connected enough to Willoughby to give him the chance of sympathy. Although, in Saunders version of the Marianne/Willoughby romance one feels a sense of distrust for a stranger who shows up out of nowhere to conveniently rescue the injured Marianne, which I do not feel we were fully privy to in Austen’s original. It’s as if updating the story makes you more aware of a stranger who is so charming from the start, although being a modern retelling I feel as if we are able to get justification for Willoughby’s actions more readily. Saunders handling of this was perfect to the point that the satisfaction of Marianne and Brandon finally coming together was even greater than anticipated.


Ellie and Edward are always my favorite couple of the story. I have just always identified with Elinor more so than Marianne only because I see myself in Elinor. In this adaption, Edward is a freelance photographer and Ellie is an accountant. I think the way Saunders tells the tale of Ellie and Edward’s romance does significant justice to them. As readers of the original, we have always known Elinor to be the reserved one, but it’s so poignant in the way Saunders writes Elinor that her reserved nature practically jumps off the page to the point that you want to be able to reach through the pages and shake her. In addition, you can feel the absolute fatigue that Ellie feels at having to be the emotional pillar for not only Marianne, but her mother too. I don’t think I ever really felt that way when reading Austen’s original. I felt the love and need to support one another, but I never had the sense that Elinor was tired or frustrated in being that emotional pillar for her sister and mother.


This adaption is a great modern retelling of Austen’s Sense and Sensibility. The elements of Austen’s work remain the same, but Saunders is able to seamlessly modernize the story. It makes for an exciting read. I was most curious to how she would create the scene when Marianne spots Willoughby with the mysterious Miss Grey and I was not disappointed. Behind the backdrop of a modern company party Marianne’s world comes crashing down. I felt pain and sympathy at the final undoing of Marianne’s heartbreak and I can’t say I have always sympathized with Marianne.


Miss Saunders is able to achieve something that not all authors can. She achieves the desire of making readers want to read more. This is what keeps readers coming back time and time again. She is able to create stories where the reader feels as if she is right there with the characters. I felt this to be a delightful adaptation of Sense and Sensibility. I cannot wait to read more from Kaitlin Saunders. I am hoping her next modern adaptation may involve Northanger Abbey.