If My Life Was A Jane Austen Novel

Persuasion. My life would most closely resemble Persuasion.  It’s true. 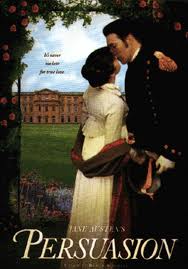 As many of you may have noticed my blog, my twitter feed and my facebook page have been silent. I have been having my own Anne Elliot moment of second chances with my Captain Wentworth. While I did not have a first round proposal, we did have a separation of two years which was mostly through faults of my own. We have received our second chance and I am happy to report that we will get our happy ending. However, we must endure a 7,000 mile separation until he is stationed stateside once again. My Wentworth is actually a U.S. Marine currently stationed in Japan. Although, if we are comparing my other half to a Jane Austen hero then he is more of a Henry Tilney whom we all know I love and adore.
In between my own Persuasion, I moved back to my parent’s house to save some money and pay off student loan debt faster. That alone has been an experience all its own. Twenty-seven and back living with your parents again, albeit temporarily, picture it. I have also been honing my craft with my employment and my patience paid off and a promotion opened up in our district. I am just waiting to see if I get that promotion. There have been other life events that have occurred and I have not had much time for writing. I am slowly making my return, however.
I am so happy to be coming back to the Austen community. I realize many of you were disappointed by my Colonel Fitzwilliam novel not making his debut in June, but I assure you that I have not forgotten him. He has been making his presence known to me constantly and hasn’t fared well with my neglect. The draft is written, but first round edits are being finished before I am able to send the pages to my beta readers.
I am also at work on other material for my other book the Northanger Abbey Vignettes. I am currently working on a piece about Isabella Thorpe titled Mirror, Mirror. I also have a story about John Thorpe which I had been working on before my hiatus.
Finally, I have some book reviews which I will be posting soon. I can’t wait to share those with you. I love to read and I enjoy sharing my affection for the activity.

Hello friends and please join me for a spot of tea.
Posted by Kate Dana at 7:40 PM

So glad to hear your hard work is paying off and that you're finding your way. Also glad to hear those Austen inspired writings of yours are also coming along.

Welcome back, Kate! You were missed! I am so delighted to hear about your soon-to-be happy ending! Hearing about couples that are happy and in love is the best!

Looking forward to sharing your affection for Austenesque literature once again!

Oohh, "Persuasion" is my absolute favorite Austen and I am actually (maybe weirdly) ecstatic that you're getting your own Persuasion story. And the happy ending to boot =] So congrats on that.

Very glad to have you back, Kate. Congratulations on the good developments in your love life as well as your writing!

Ohhhh, dreamy! I love second chances! Lovely blog and nice to meet you. :)